Checking In With Van Coke Kartel 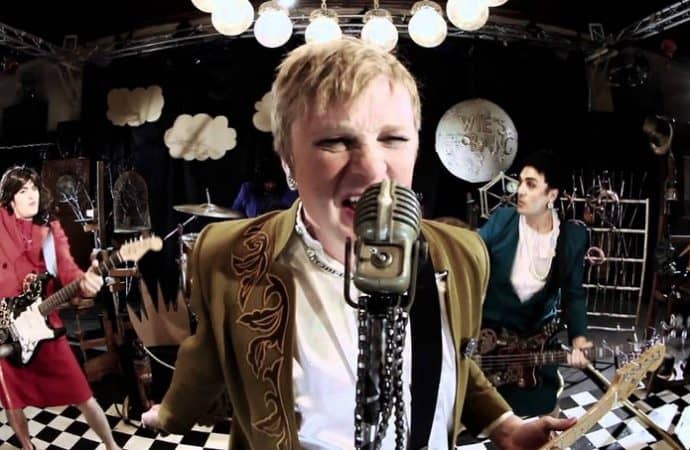 It’s a beautiful spring day in the Northern Suburbs as we roll into Bellville Studios to get a sneak peak of Van Coke Kartel’s 5th studio album, Bloed, Sweet & Trane. The album isn’t even finished yet and already a music video has been completed to premiere online for their first single “Môregloed“, crammed with footage

It’s a beautiful spring day in the Northern Suburbs as we roll into Bellville Studios to get a sneak peak of Van Coke Kartel’s 5th studio album, Bloed, Sweet & Trane.

The album isn’t even finished yet and already a music video has been completed to premiere online for their first single “Môregloed“, crammed with footage from their recent trip to Amsterdam. This is how these cats roll – an album each year, headlining S.A. festivals and ambitiously pulling off international tours – while delivering brilliant music videos and then walking away with all the awards … singing in Afrikaans.

“Wilder drums, wilder solos, wilder structures, wilder … not so pop structured. Definitely the heaviest songs we ever made,” explains frontman Francois van Coke when asked about the sound.

“With the previous albums we’ve caged [drummer] Jason [Oosthuizen] much more,” says bassist Wynand Myburgh. “I think it has to do with the fact that we recorded this album stuk-stuk – we’ll come in and track some stuff live … so we don’t think about it that much.

“We gave it much more freedom; if the guys wanted the bridge to be longer, they could do that. Wie’s Bang is slightly more produced and slightly more polished; this album is more spontaneous – Jason can jam, [lead guitarist] Jedd [Kossew] can jam. They’ve got such great abilities, so we decided: ‘Let’s use it.’

“Francois came up with the title and I think it ties in with our previous albums. The Van Coke Kartel ride was and is a Bloed, Sweet & Trane-story … it’s hard. When we started it out in 2007 we didn’t know if Fokofpolisiekar was ever gonna play again. It was a difficult space to be in and it was difficult for us because Fokof had such great songwriters with Hunter’s lyrics and Johnny’s musical ability – it was a challenge for us [Van Coke Kartel].”

“I think every song is very personal and I think it’s about friction. The first three songs is how I feel about our country. The next three is how I feel about [long pause] booze … and the negatives and positives about it. And there’s maybe a song about love. It’s definitely much wider …” says Francois.

“In the past we were like: ‘Shit, we have two months to write this album.’ If you write, it’s a bit like tunnel vision because there’s a lot happening at once which comes out in the lyrical content,” says Myburgh. “With this [new album] some of the stuff has been written at the beginning of 2012 and some of the stuff was written very recently. Like Francois said, it covers many more themes.”

The ‘Sweet & Trane’ of the title obviously relates to hard work, but why ‘Bloed’?

“Me and Francois had a lot of blood-fights in the past. There was minimal friction, but when it was there, it was intense. This thumb of mine had surgery,” says Wynand.

“Dude, it was on the front page of the newspaper,” says Francois.

Wynand explains: “It’s where I hit him over the head with a glass bowl. This thumb has been broken at two places, they had to put pins in from our previous fights.”

“I think Wynand won them all. I just have to ad that it was serious drunk fights where you can’t really remember why you had to fight,” says Van Coke.

Wynand cans the subject: “We’re not really fighters, that’s because my thumb broke, because I hit like an idiot.”

On MK and The Scene

“Ek en hy [Francois] praat baie oor hoe fucked die scene is. Die scene is nou in sy poes,” says Wand when we start talking about the death of MK. “There’s no more playground or platform for every second band.”

Wynand continues: “MK empowered bands to reach a certain spot where they could feel that the general public could get an idea of what they’re about … before most of them did any real ground work. And then you can see that stuff doesn’t last long. En sodra jy die scene onder hulle uitpull… [makes a flatulent sound].”

“We made music before MK existed…the cool thing about MK was that people from Welkom and Bethlehem could check you out, and now they won’t,” says Francois.

“I think it’s great to have change, it brings new challenges. And now you have to apply your creativity to new mediums. Which I think is befok. It’s like a fresh start for everyone. Om die koring van die kaf te skei,” says Wynand.

On Hitting the Ceiling

“This is the trick,” says Wynand. “That’s why a lot of bands struggle, especially rock bands. The other day we were looking for a supporting band in Newtown. We’ve been struggling to pull a crowd in central Jo’burg. We did some research and we know Pestroy pulls a crowd in Jo’burg. Then we looked at the band’s Facebook page and they’ve got like … 4 000 Likes. And we’re like, shit! These guys are worlds behind – they’re a cool band, they’ve got a following … shit, but then I realised quickly how good we’re actually doing. We’re one of the lucky ones … well luck and hard work probably goes hand-in-hand.

“There’s only a handfullof people worldwide who enjoy rock music. The audience is not that big. If you sell 10 000 rock albums in S.A., that’s fokken baie! Especially now when it’s the most difficult it’s ever been. The thing is to take what you’ve got and to change it into a business model that works. Our model is set up to bring out product on a regular basis, whether it’s videos or albums … to stay cutting edge. And to produce shit that keep people interested. So if you’ve only got 5 000 fans, those fans will come to your next show and they’ll buy that new product.”

This article is from the November 2013 issue of Rolling Stone SA, to subscribe to the magazine click here.

Van Coke Kartel will perform at this year’s Synergy Live Festival at Theewater Sports Club, Theewaterskloof Dam, Villiersdorp on Friday the 29th of November, main stage at 10:15pm. Click here for the full line up.

Rolling Stone is giving away ten double tickets to the festival – to stand a chance to win a pair, send your name, surname, ID number and cell phone number to competitions@rollingstone.co.za with “Synergy Live” in the subject box.

Winners will be notified on Wednesday 27th of November 2013 and they can come and collect their tickets at our Rolling Stone offices on Thursday the 28th at 32 Jamieson Street, Planet Art Building, Unit 6, Cape Town. Call us at 021 426 5590 when you’re at the door. Terms & Conditions apply.