Jägermeister: Back The Artist 2014 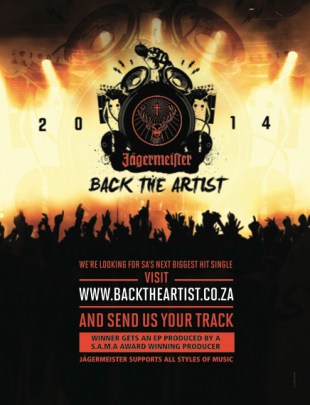 Sheen Skaiz is a Rapper, Producer, Singer and Songwriter, born May 25, 1989, hailing from the city of Durban, South Africa. His interest in music began at the age of 14, when he was introduced to the loop program called Mix Man. Little did he know, this would spark a new found obsession in his

Sheen Skaiz is a Rapper, Producer, Singer and Songwriter, born May 25, 1989, hailing from the city of Durban, South Africa. His interest in music began at the age of 14, when he was introduced to the loop program called Mix Man. Little did he know, this would spark a new found obsession in his life. The first beat he created was influenced by drum ‘n bass, while the music that inspired him growing up was electro, break beats, trip hop and rap.

He spent most of his days hooked on Mixmag and The Source magazines, following the rise of new producers and DJs every year, and watching the music industry transform. Being a skateboarder growing up, he was always introduced to new music, new cultures and artists. Later on, he began to search for more interesting ways to create music. A rebel against the academic system, Skaiz was constantly distracted by art, sketching, graphics, and searching for new sounds.

Skaiz then began to experiment with more advanced programs, and taught himself how to play the keyboard, elevating his skills by remixing, mixing and sampling sounds and music from the world of pop culture. He fused rap with electro, experimental hip-hop and sample pieces from dance music, keeping his mind open at all times. While completing his degree in Creative Brand Communications at Vega “the brand communications school”, he became a DJ on the local club scene. From this, he developed an ear for predicting the future hits of tomorrow. Word then spread that there was a fresh new DJ/producer on the rise, and, being known for his distinctive style of production, Skaiz was contacted by local producer Sketchy Bongo.

This was the beginning of a new alliance. Sketchy Bongo played a vital role in recording process of Sheen Skaiz. Skaiz then went on to produce for many local artists, and scored music for television and radio adverts.

Sheen Skaiz began to release a flurry of “freestyles” on social networks which helped him gain some recognition in the underground scene, he then went on to work with Plastic Shadows, which sparked the creation of the song “Drangs & Brangz” . This song quickly got the attention of local listeners, becoming the official song for Durban’s “Colour Festival”. Skaiz then went on to perform at local clubs and festivals in and around Durban. Although his aim was to become a record producer, he realised that his hunger for creativity in the music world was much more than just creating beats, he decided to expand his productivity, and craft his own sound, this was an escape for him, and his channel to tell his story through the constant ups and downs of life.

Jägermeister: Back The Artist – How it Works

Jägermeister has always been about the music. Last year we launched Back The Artist 2013. Jägermeister went in search of the next hit radio single, and we certainly found it.

The 2013 Winner, Sheen Skaiz, is currently recording his album with Justin De Nobrega as well as having a documentary and music video shot in Cape Town.

This year we’re searching for your biggest track – whether hardcore, deep house, rock ‘n’ roll, pop, kwaito or trance music, we want to give every artist the opportunity to step up and be counted.

Back The Artist works in the following way: Any band/artist from South Africa, whether famous or unknown, can submit an audio track. It’s the music that is the most important.

The tracks are then graded, to ensure sound quality,and those selected are into the first round of public voting.

There are 4 rounds of voting, Top 80, Top 40, Top 20, and Top 10. These are weekly votes, so each artist or band must encourage their fans in order to stay in the competition. Votes are limited to one per day per person. This is monitored carefully to ensure fairness to all.

Each week, there will be a cut and the remainder will go through to the next round.
Once in the top 10, the judges decision comes into play. The judges are music industry veterans, hit song producers and the Jägermeister team. The judges’ decision is final.

What’s up for grabs? Production time in studio with one of South Africa’s leading radio producers.