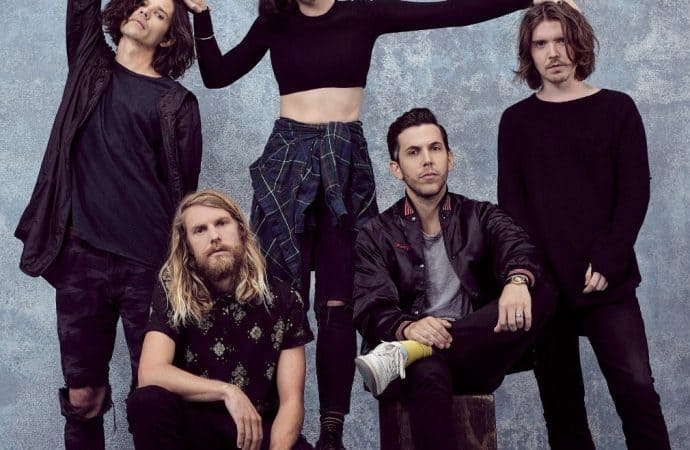 Drummer Ryan Rabin on his South African roots, the Spice Girls and their breakthrough album, ‘Spreading Rumours’ When he was 18, Grouplove’s Ryan Rabin had a South African flag tattooed on his right wrist. The flashes of red, blue, green, black and gold are visible at moments in the digitally released documentary I’m With You, named

When he was 18, Grouplove’s Ryan Rabin had a South African flag tattooed on his right wrist.

The flashes of red, blue, green, black and gold are visible at moments in the digitally released documentary I’m With You, named for the lead-in song of the USA band’s second record, Spreading Rumours. It’s the only obvious clue in the film that Grouplove’s American-born drummer and producer has his roots in this country.

His father is, of course, Trevor Rabin, who emerged first as a pop pin-up as part of the iconic 70s group Rabbitt, and then a respected producer (he was the arranger and producer of Margaret Singana’s “Where Is The Love”). After leaving the country in the late 70s, Rabin turned up on guitar and vocals as part of the reformed rock outfit Yes, eventually playing on and songwriting on four of the band’s later records.

These days the LA-based Rabin has an enviable career as a film composer, which has earned him several awards including the Henry Mancini Award at the 27th Annual ASCAP Film & Television Music Awards. His own output is infrequent, but Rabin’s most recent album was the all-instrumental work Jacaranda.

It’s a homage to the ubiquitous trees of the Highveld, where he grew up – and also the name of his studio in LA, The Jacaranda Room. And, like his son’s tattoo, is a powerful statement of his origins.

“Since I was young, we’ve been going out to South Africa every few years or so to visit family,” Ryan Rabin says on the line from the USA recently. “The trip that resulted in the tattoo was especially emotional because I spent a lot of time with my grandmother on my dad’s side, getting to know her more because I was just that little bit older. I have a special connection with my family in South African, and I’ve got to know Joburg and Cape Town because of them.”

It’s not surprising that someone who values family and deeply-felt connections would land up in a band like Grouplove. In many ways, these are the foundations on which the five-piece is built.

“When we all met, we were all at that same place in life so there was like an honesty in our friendship and an honesty in the way we met that led to this really unique friendship that kind of is the early group, that group love, that bond,” says the group’s co-vocalist, Hannah Hooper, in I’m With You, which offers real and compelling insight into Grouplove’s history.

The members – Rabin, Hooper, Christian Zucconi (vocals, guitar), Sean Gadd (bass, vocals) and Andrew Wessen (guitar, vocals) – had met when they all found themselves at the Ikarus Artist Commune in Crete in the summer of 2009. Was it serendipity that the four Americans and one Brit came together that year? “It was such a random, sort of fated experience,” Rabin says. “I am not one for believing in fate but this this particular experience was just so out of nowhere and so unexpected and unforced.”

It took another year or so before the five friends became a band – but, on the back of their live shows, by the end of 2010 Grouplove was being name-checked as one of the best new bands of the year. A deal with Canvasback/Atlantic Records saw the re-release of their independently released self-titled EP and, in 2011, the arrival of their debut full-length, Never Trust A Happy Song.

The record was, in spite of its title, 12 tracks of impossibly lovely music that was quickly slotted into indie pop terrain, delivering a clutch of chart-toppers, including “Tongue Tied” and “Colours” (perhaps it’s the influence of Gadd but Grouplove is possibly one of a handful of American bands sticking, happily for us, with UK spelling).

Late last year, the band followed up their debut with Spreading Rumours, 13-tracks of music that made a convincing case for Grouplove being more than energetic partystarters with catchy tunes. The band’s biggest ace-in-the-hole is a feel for melodies that makes just about every song memorable – including singles, “Shark Attack” and “Ways To Go” (both accompanied by very watchable and hilarious videos).

How the band achieves this is something I ask Rabin in an email after our 15 minutes on the phone comes to an all-too-quick end. “We let the melodies guide the song,” comes his reply. “For us the vocal melody is king, and we don’t stop writing a song until we feel every word really grabs you. The vocal melody, phrasing and rhythm drives what the production will sound like, what the lyrics are.

“Some songs start from just jamming together at a rehearsal or a sound check, others are written separately and then brought together by everyone in the studio. Some of our songs come from earlier demos before we all met, such as ‘Colours’, which Christian wrote before we all met… then once someone brings an idea to the band, we all collaborate and finish it together. But then a song like ‘Ways to Go’, for example, was written in the spur of the moment in the studio.”

Has the band’s songwriting process changed between the two albums?

“Never Trust a Happy Song was recorded after we only had played a few shows together, (and) things had developed quickly for us in the beginning,” Rabin explains. “Spreading Rumours was recorded after hundreds of shows together over three years of touring. I think we captured a raw energy more vividly on the new album and a cohesiveness that can only come from playing together night after night.”

Central to Grouplove’s sumptuous sound is the vocal interplay between Zucconi and Hooper – a male-female combination that hasn’t sounded so terrific since possibly The Magic Numbers. “The interplay between the two of them (Hannah and Christian) has always been part of our story,” Rabin confirms. “We all met in Crete four years ago at an artist commune and Hannah and Christian were newly in love. She started singing with Christian slowly but surely as the relationship grew, and that aspect of the vocals has always been part of our creative process.”

Hooper’s also a visual artist, so it’s unsurprising that Grouplove’s recorded, video and live work comes sheathed in a very definite aesthetic – colourful, exuberant, irreverent, idiosyncratic, with Hooper (usually clad in a full bodysuit) and Zucconi spooling out an irresistible energy that takes everyone in its wake. In I’m With You, Hooper likens Grouplove to the Spice Girls, with the band’s growing body of fans each having their favourite. “I agree with her!” Rabin says. “I may even have gone to a Spice Girls show or two when I was younger. I think of myself as a cross between Sporty and Posh. Hannah is obviously Ginger, Andrew is Baby, Sean is Scary, and Christian is Posh all the way.”

Rabin produced Spreading Rumours and says he loves playing and producing equally. “I get the same thrill from playing a show to thousands of people as I do crafting a record and listening back to it as it starts to really make sense to my ears.” Having grown up in a studio, it’s no surprise that Rabin has worked with his dad over the years. “I played on a couple of the tracks on Jacaranda and have done some work on some of his film scores. It’s always great working with him but these days we’re too busy for each other,” he says. That busyness isn’t overstated. This year has seen Grouplove on the road near incessantly and working on different projects, like a cover song for Spotify (fans voted and the winner was Beach Boys’ “Don’t Worry Baby” out of a list that included Taylor Swift, Nine Inch Nails, Bjork and Daniel Johnson) and soundtrack work (‘Let Me In” for the film The Fault In Our Stars).

“We recently got back from Australia supporting the album out there and prior to that we did a promotional acoustic tour when the album first came out,” Rabin says. “Now we really get to go all out back here in the States with a full live production and playing to the biggest crowds thus far. We are really excited, and after a long festival season this summer, we’re going to follow it up with an amphitheatre tour in the Fall in the US to round off the year. We’re really hoping that somewhere in that schedule there are a couple of weeks that we can dedicate to playing in South Africa.”