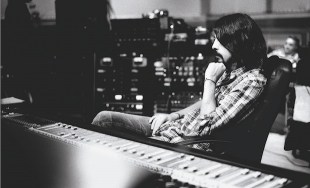 Inside the Foo Fighters’ wildly ambitious new album and HBO series This is the most terrifying part – the last day of the week,” Dave Grohl says over the phone one morning from New Orleans, in a voice actually more heavy with excitement than fear. The Foo Fighters’ singer-guitarist-leader is about to go to a

This is the most terrifying part – the last day of the week,” Dave Grohl says over the phone one morning from New Orleans, in a voice actually more heavy with excitement than fear. The Foo Fighters’ singer-guitarist-leader is about to go to a local studio where his band will film a live performance of a new song. The scary part: Grohl is singing words he just finished writing yesterday, based on his week here working on an episode of Sonic Highways, an eight-part TV series about America’s greatest music cities.

Conceived and directed by Grohl, the show – to be shown on HBO starting in October – follows the Foo Fighters as they immerse themselves in the history, culture and personalities of the nation’s rock, blues, punk, funk and country capitals, including Chicago, Nashville, Austin, Seattle and Washington, D.C. Each visit culminates with the Foos cutting a new song in that town, with lyrics reflecting Grohl’s revelations there. The eight tracks will be on the Foos’ new album, also called Sonic Highways and out in the fall in conjunction with the series and the group’s 20th anniversary.

“I don’t write the words until the day before I sing them, sometimes that morning,” Grohl explains avidly. “It’s also a relief, because I’m pulling direct inspiration.” In D.C., that meant revisiting scenes from Grohl’s hardcore-punk adolescence there. In Nashville, he talked to country singers about that music’s deep roots in the church. And in New Orleans, Grohl spoke to R&B authorities such as Allen Toussaint and Trombone Shorty, while the Foos played a riotous concert with the Preservation Hall Jazz Band, jamming on hits like “This Is a Call” with Crescent City pepper.

“We were hanging on for dear life with those guys,” Foos drummer Taylor Hawkins confesses. “To have their drummer Joe Lastie next to me, playing the craziest upside-down stuff – I just tried to keep time. I wanted to hear him.”

“I don’t want Foo Fighters to turn into a zydeco band – I like my Foo Fighters,” Grohl contends, laughing. “But when Joe Lastie shows you the evolution of rhythm or Cyril Neville tells you how a steamboat’s paddle wheel influences the rhythm of the city, it’s inevitable that it makes its way into what you do.”

Grohl notes something he learned while talking to Woody Guthrie’s daughter Nora for an episode: “She said he was basically a reporter. He wrote what he saw.” In Sonic Highways, “we’re the reporters.” (Disclosure: I was interviewed for the series.)

The series is Grohl’s follow-up to his acclaimed debut as a director, 2013’s Sound City, about the fabled studio in Van Nuys, Los Angeles, where Grohl’s previous band, Nirvana, recorded their breakthrough album, Nevermind. “The thing people appreciated about Sound City was the humanity – the stories of the people there,” Grohl says. “I thought, ‘Let’s do the same for studios all over the country.’ ”

Originally, Grohl wanted to go worldwide, filming and recording in cities such as Johannesburg, South Africa, and São Paulo, Brazil. “That was financially impossible,” he concedes. “And we’re an American band. We wouldn’t be the band we are if it wasn’t for the cities here and their music.”

Still, Grohl says, “this project is like eight Sound Citys” in its production and storytelling scale. And Grohl is covering most of the costs himself with some help from HBO. He mentions the Foo Fighters’ two stadium gigs in Mexico City last winter: “Those were free shows for my band. That money went into this series.”

Nina Rosenstein, senior vice president of HBO Entertainment, has been on the phone with Grohl “almost on a daily basis” during filming, she says. “You instantly feel his passion.” The difference between Sound City and Sonic Highways is in the personal way Grohl steers his narrative. “In Chicago, you have the blues scene,” Rosenstein explains.

“But then there is a curve in the road, and he talks about going to see Naked Raygun” – the early-Eighties Chicago punk band – “with his cousin and about that light bulb going off: ‘This is who I am, what I want to be.'”

Grohl and his Foos – Hawkins, bassist Nate Mendel and guitarists Pat Smear and Chris Shiflett – began musical pre-production for Sonic Highways with producer Butch Vig last year. “It was a complicated process,” Grohl says. “I studied each city’s history and decided on a theme. Then I looked at all of the music I’d written in the past couple of years and matched the theme to the music.”

But it was all raw material until filming, as every city shaped the band’s relationship to the music and Grohl gathered lyric inspiration from the memories and insights of local players and experts. Hawkins likens the recording sessions at each stop to “tricking out a car. We get a new stereo put in. We put the wheel rims on. We have a pretty good idea of what he song will be like. But then Dave says, ‘We’re gonna throw a go-go-beat section in the middle,’ to be on the edge a little bit more.”

“It’s an eight-song album,” Grohl says. “But it’s gonna be our longest album – because there are some epic jams. When you get Joe Walsh with you out in the desert” – referring to a session with the Eagles guitarist at a studio in Joshua Tree, California – “it’s not going to be a three-minute pop single. It gets a little weird.” In the middle of making Sonic Highways, Grohl took a night off in April to play drums on Nirvana songs again with Smear and bassist Krist Novoselic at the band’s Rock and Roll Hall of Fame induction, with the late Kurt Cobain represented at the mic by iconic and rising women: Joan Jett, Kim Gordon, St. Vincent and Lorde. It was a stunning performance, one of the best in Hall of Fame history. It was also about honoring the past with new work – a lot, Grohl agrees, like his TV show.

“Evolution has to be emphasized,” he insists. “It’s easy and beautiful to sit back and watch legends do what they’ve been doing for decades. But what’s exciting in rock & roll is to see what comes next. Lorde may be a superstar, but she’s deep, man” – although, Grohl confesses, “I barely got to say two words to her. She flew from God knows where, and we rehearsed the song once. Then we walked onstage and did it. It was very Nirvana,” he adds with a rough chuckle, “one rehearsal and not a lot of communication.”

After hitting the road to make Sonic Highways, Grohl and the Foos will hit it again to promote the broadcast and album. “We miss playing,” he says with more of that excitement in his voice. “Last night at Preservation Hall felt so good. I mean, it’s what we do. It’s strange to think that I’ve just toured America, and now I have to tour it again. But I’ll do it happily.”

Grohl is also ready to jump to his next project. “I’m not kidding – I already have the idea for it, it’s fucking rad and nobody’s done it yet,” he raves. “I came up with this idea a month and a half ago, and everyone said, ‘Dude, calm the fuck down. Let’s finish this one first.’

“Hey, kudos to every musician who stands in front of a mic and hits ‘record,'” Grohl says. “But at this point in my life, that’s not enough for me. It’s time to think of ways to do it differently.”