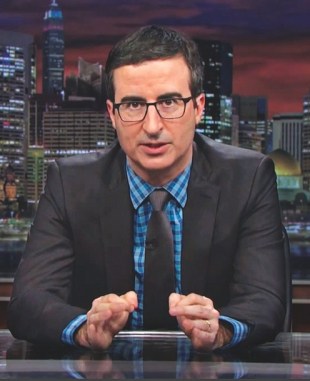 The comedian’s brilliant new show lets his rants go deeper and hit much harder Any man who can make Right Said Fred politically resonant is clearly doing something right. And John Oliver is such a man. He certainly dreamed up a novel way to trash Syria’s Bashar al-Assad on his HBO show, Last Week Tonight With

Any man who can make Right Said Fred politically resonant is clearly doing something right. And John Oliver is such a man. He certainly dreamed up a novel way to trash Syria’s Bashar al-Assad on his HBO show, Last Week Tonight With John Oliver. After news reports that the dictator downloaded iTunes tracks from LMFAO, Chris Brown and Right Said Fred, Oliver noted, “He’s half mass murderer and half your creepy sophomore-year room-mate.” But then he brought on Right Said Fred to rework their Nineties-cheese classic “I’m Too Sexy” into an anti-Assad number: “You’re just a walking taint/The opposite of saint/At least Hitler could paint.” Nobody saw that one coming.

It’s a typically brilliant masterstroke from Last Week Tonight, one of the year’s happiest comedy surprises. Oliver has always been a likeable second banana as the Senior British Correspondent on The Daily Show or the token limey twerp on Community. With his Noel Gallagher mop of ratty black hair and schoolboy spectacles, he looks like a common-as-muck version of the guy Americans think of when we imagine the British. But on Last Week Tonight Oliver has found his own personality – just a low-key 37-year-old geek from Birmingham wandering through the political scene looking for bullshit. And it helps that he’s on a cable network where he can actually call it “bullshit.”

At first blush, Oliver might not seem as sharp as Jon Stewart or Stephen Colbert, but he doesn’t need to be. Last Week Tonight has a huge advantage over the other faux-news roundups: It runs once a week. It’s like the “slow food” approach to topical comedy – instead of trying to compete with social media (or Stewart), he can hit harder with rants like his instant-classic tirade on Net neutrality. That was Oliver’s star-making moment – he spent 13 minutes delivering a fact-quoting breakdown of legislation that makes most of our brains fuzz over. As Oliver says, “The cable companies have figured out the great truth of America: If you want to do something evil, put it inside something boring. Apple could put the entire text of Mein Kampf inside the iTunes user agreement and you’d just go’Agree.”

Oliver’s best line ever on Community came this season, when he set his sights on seducing a student. “Isn’t she great?” he marvelled. “She’s everything I love about America. Bold, opinionated, just past her peak and starting to realize that she has to settle for less.” His almost cartoonish Englishness means he’s a perpetual outsider here – he never even set foot on American soil before The Daily Show. But he turns that into a plus as well. He doesn’t have to keep apologising for his bewilderment at America, since he’s not trying to pass himself off as a regular citizen. His greatness is wanting the United States to expect, even demand, a little more than we’re used to getting. Even if that means heeding the geopolitical message of Right Said Fred.