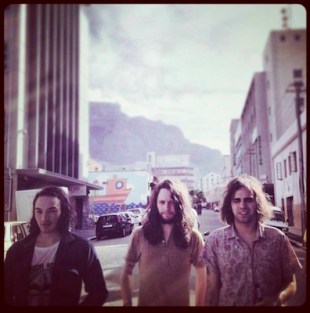 Catch up with the Seattle psychedelic-trio ahead of their performance shows in South Africa “At this point, I don’t know what it’s like to be a whole human being who showers regularly and does anything normal; I’ve forgotten what that’s like.” Even in a moderately lax state, it’s apparent that bassist Tarek Wegner possesses both

“At this point, I don’t know what it’s like to be a whole human being who showers regularly and does anything normal; I’ve forgotten what that’s like.” Even in a moderately lax state, it’s apparent that bassist Tarek Wegner possesses both inexhaustible joviality, counter-balanced with healthy streaks of unfeigned sarcasm.

During our banter-ridden conversation about their second LP, Sonic Bloom, it’s evident that innate talent is not the only precursor of their musical creativity. Instead, they’ve found ways to operate and cultivate this talent to suit their own musical objectives.

Despite the growing ubiquity of pop culture, these three musicians have managed to create their very own packaged symbol for their culture of cultural recuperation. For Danny Lee “Blackwell”, James Traeger and Tarek Wegner, their approach is to throw everything into the mix, flaunt their “disorder”, so to speak, and not care if the final combination is in bad taste or not.

For a band attempting to expose progressive punk-struck frenzies with corrosive guitar riffing whilst simultaneously cloaking their soundscapes in mesmerising spatial cues; it’s clear that Night Beats are on a steady upward trajectory.

The lure of suffocating music within genre-tags is so that music befitting a singular style is easier for listeners to classify and digest. People box Night Beats as a “psychedelic garage-rock band” for fear of being incapable of quantifying their style of music. As Danny Lee cites The 13th Floor Elevators, The Rolling Stones and Lee Moses as testaments to their sound influencers, he then segues into unveiling their intentions for the record: “We weren’t trying to make a record exactly like that, but the fidelity and the quality of them still always amazes me.”

South Africans are days away from putting to rest the greatest calibre of leader in world history, and with a spotlight firmly fixed on the country, it hoodwinked me into thinking: “What the bleeding-hells are a psych outfit expecting ahead of their first South African tour?”

From the darker-set ideals of ritualistic performances, to lopsided breasts, necrophilia and gruelling touring schedules it turns out to be a tug-of-words game fuelled by sycophantic escalations and uninhibited regression.

So you’ve been touring extensively since your LP, Sonic Bloom, launched in September and after giving the Internet a good creep-around, it looks like you’re in Manchester now?

Tarek: Yeah! Today will be our last show with Al Lover – he’s a psychedelic DJ we’ve been touring with. It really makes it interesting to bring him along; it becomes more of a party vibe!

Completely, it’s also opposite to what you actually do on stage – I actually read some interesting things you said at the Austin Psych Festival earlier this year…

T: What did I do this time!

Well you said: “This song is dedicated to all the girls with lopsided tits”!

T: You know, I care, for all women. Maybe I’ll dedicate a song to lopsided testicles? Get the guys on my side too.

Well, a lot of the time people think South Africa is black and white, not a multi-dimensional culture.

T: Well we’re pretty multi-dimensional too you know, we exist in separate dimensions.

Yes, and a lot of people talk about your music crossing different genre-tags too, it’s not just psychedelic or just garage-rock. Do you think people try and quantify music they struggle to classify?

T: Yeah and we’re moving beyond both of those genres as well. Everyone’s doing the psych thing now, people are just throwing it around a lot and I don’t even know what it means anymore. We don’t really care that much, maybe we’ll just do something totally off the wall and then what will they call that? It really just pushes us farther into the unknown for the next time we record.

Speaking of which, where did you record Sonic Bloom?

T: It was the same situation for both records, actually; same place, same producer [Kyle Brunette]. We were on the road for two years straight and recorded pretty much in between. I think we had just a couple of months off in that whole time.

That’s mad! But part and parcel of being a band in this day and age is you have to get out there. Which process speaks to you more though – the touring or the recording?

T: At this point, I don’t know what it’s like to be a whole human being that showers regularly and does anything normal; I’ve forgotten what that’s like. I’d like to record; I’ve forgotten that feeling too.

Oh! The other guys just showed up. You’re on speaker with like three British people listening to you right now.

Hello British people! Tarek and I have been talking about lopsided breasts and not showering for long periods of time. We were also just chatting about the band touring together; do you have common ground that you all agree on? Do you write the songs as a unit?

Danny Lee: You know, I write the songs and then take it to the guys, sometimes ideas get thrown around and the music takes on a different shape – we have that kind of model.

We talked earlier about the different genres you explore and I’ve noticed some new additions and sounds to your palette – jazzy “At the Gate”, bluesy “Satisfy your mind”, some Zombie influence in “Playing Dead”. But is there a sub-textual backstory to this LP?

DL: Totally, you’re right. I guess the backstory for us is that we recorded in between tours while we travelled and experienced a lot and listened to new stuff. It’s really a culmination of all these experiences and ideas. It came from the development of a band touring constantly. There was no, “we were locked in a cabin in Montana” backstory. We were in a van for six years travelling the world and got the lows and highs of it all.

I think you should welcome the start and stop of it all then, this is a much more adventurous LP and there’s an immediacy to the different melodies and hooks – they are much more direct now.

DL: Exactly, it’s got so many different sides to it that may in a sense really be us just trying to explain the process of recording over a long period of time.

In the 1960s, Sam Cooke released Night Beat, is your name homage to this album?

DL: You got it. Sam Cooke in general, really, and also to R&B and soul music.

You can hear that through the track “Real Change”

DL: It’s pretty interesting, the song’s not exactly about that, it’s about necrophilia. We were thinking of titles and always see those guys around.

Tarek: It will have nothing to do with issues though; it will be about homeless zombies.

Ha! But Danny, do you think some of your side projects help with Night Beats? Or are they completely separate artistic expressions?

DL: If anything, that’s the point, to make everything better. If some ideas can’t be used appropriately for the one band, they could work for the other. I definitely think they’ve helped make this record what it is.

I’m a firm believer in that collaboration is crucial, especially when bands come together for one theme – have you seen the line-up so far for Austin Psych Fest 2014 yet? Of Montreal, Primal Scream, Liars, your mates Black Angels…

DL: Yeah! They’re doing multiple announcements but I don’t really give a shit about Of Montreal…

[…And then the line goes dead and I’m swearing and sweating, obviously]

Danny Lee: Hello! You hung up because we said fuck Of Montreal?

I swear to God when that happened it was as if Of Montreal had tapped into the phone line, hated what they heard and cut the wires.

DL: “You’re done kids”! No, it’s really so early on in the announcements, but it’s one of the best festivals in the States right now. I mean, there’s Coachella but they’re gonna have Muse and some shit headlining, that’s just boring. It’s better to have diversity, even if it’s under the banner of psych.

What’s the best festival or country you’ve played in so far then?

DL: South Africa is definitely going to be the best; it’s the one I’m most excited about.

Talking about opening yourselves up – what was the reason for going with a new label after your 2011 release with Trouble In Mind?

DL: We didn’t do it for a pay cheque at all; creatively, they (Austin Psych Fest’s label Reverberation Appreciation Society) are so supportive and we’ve known and worked with them for years. We wanted to try something new and were tired of just waiting around.

Now you’re a niche band from Seattle arriving in South Africa in possibly the most momentous time in world history. I was streaming the Mandela Memorial in Johannesburg earlier – it’s surreal; are you going to pay respects when you’re here?

DL: I think we’ll be in one of the cities during his procession so we’ll see. I’m not sure how we should really present ourselves; we’re outsiders to this whole situation and it’s definitely an honour to come, but we don’t want to act like we’re jumping on the bandwagon. There’s going to be a lot to take away from such a historic time.

Do you ever really care what people say about your music or the things that the band does? There’s just so many people with so many opinions – is it hard to disconnect?

DL: We really try not to care, and that’s the thing, there’s just so many people that you need to just focus on your own opinion. Especially if you put yourself out there – it’s not realistic to say you’ve never read a review or YouTube comment before, but as far as someone’s personal review of that record, that information doesn’t factor into how we go about the next record.

I’m just interested in it from a band’s perspective, the rate at which we consume information is overwhelming and when you have a band like yours with a typical type of listener, they can get “loud”.

DL: That’s the thing, when people process the information so quickly it’s just so disposable these days. You really just have to focus on what’s gonna last, and what’s gonna last is the music.

Is there a sense in which your music has an escapist feel? Sonically and lyrically, it feels like you’ve cultivated your own very specific world.

DL: Yeah that’s the point! Making your own environment that you can share with people and have them enjoy it. That’s a whole big topic right there, about being in your own world and taking apart the real world by deconstructing and rewriting it.

Do you get a kick out of watching people react to your songs then?

DL: Oh yeah, people freak out sometimes. Imagine a group of people losing their shit? It’s like a religious ceremony when people speak in tongues and roll on the floor, and when that happens it’s the best.

Just taking off their clothes, flailing their arms about? Now I’m excited for your show on Saturday.

T: I hope it doesn’t happen, because I don’t like the sight of a naked person! [whispers] I’m being sarcastic.

DL: Yeah and how can we say hello?

I’ll get naked and then you’ll know.

Presented by Psych Night & Vans, Night Beats will perform on Friday, 13 December, at the Town Hall in Johannesburg, and at Assembly in Cape Town on Saturday, 14 December.