Sound Checking In With Bruce Springsteen At Bellville Velodrome 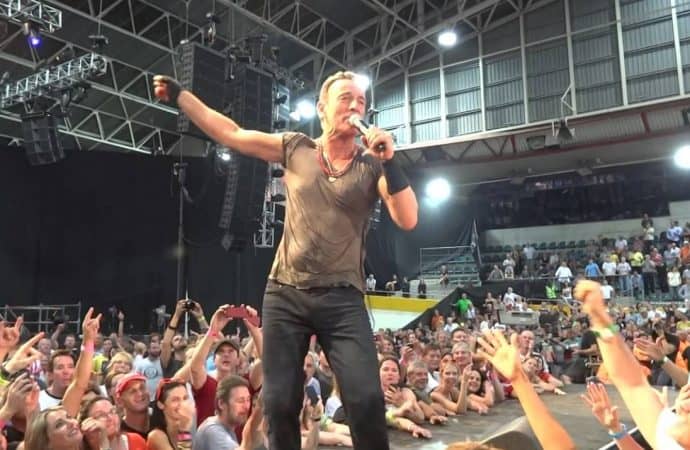 Video: ‘I got a nice letter from some South African musicians – it was sort of the tipping point’ We’re hanging at the media marquee tent minutes before Bruce Springsteen and The E-Street’s sound check at the Bellville Velodrome. The Boss doesn’t do the usual press con shtick. Instead, his people have invited a select

Video: ‘I got a nice letter from some South African musicians – it was sort of the tipping point’

We’re hanging at the media marquee tent minutes before Bruce Springsteen and The E-Street’s sound check at the Bellville Velodrome. The Boss doesn’t do the usual press con shtick. Instead, his people have invited a select band of reporters to an exclusive Q&A session before his concert.

The South African media are divided into two camps.

The first is a bunch of young, nervous journalists furiously compiling questions they think The Boss has never been asked. And then there’s the unifying story between seasoned journalists and industry veterans who went to go see him 1988 in Harare, Zimbabwe during the Human Rights Now! Tour – the closest he ever came to visiting South Africa. That fabled Amnesty International gig also featured performances by Sting, Peter Gabriel, Tracy Chapman, Youssou N’Dour, Oliver Mtukudzi, Ilanga and Cde Chinx.

We enter the stadium and get treated to two exclusive live sound check songs with the full E Street Band and Tom Morrello: “Heaven’s Wall” and “Just Like Fire Would”. The performances are overwhelming – everyone scatter to rig their equipment to capture this private two-song show. The band sounds fired-up and ready for the evening.

Next we all gather around the Boss while he makes himself comfortable on the stage’s barricade. Here are some of the highlights from the Q&A session:

It’s just a great song. We were looking for something to open the show [with] and to greet everybody. And it was fun to learn, we’re looking forward to play it and hope that we don’t fuck it up.

On playing Amnesty International’s Human Rights Now! Tour in Harare, Zimbabwe back in 1988:

Being here [in Africa] in 1988, was a pivotal moment for us – we stumbled onto the crossroads of history by accident, I suppose. Zimbabwe at the time was doing well and it was a very memorable show. There were two African shows we did then, it was Zimbabwe and Ivory Coast – those two of the most memorable shows of our lives really. They were just amazing shows. We’re glad to get back. This has been an interesting year, we revisited 25 years ago of our experience, you know?

I got a nice letter from some South African musicians – it was sort of the tipping point. It was very heartfelt. And off course with Nelson Mandela’s passing which really means so much to the whole world and to us too, you know.

On how younger generations engage with music using the internet:

All that history of music landed on their heads at once. Whereas with guys like me, it was pieced out – literally group by group, record by record, week by week, month by month. So we immersed ourselves in it in a very different way. And I think that we were very aware, generationally which awe fell where. But if you are young today all of those things fell on your head at one time. And my son will go listen to Tom’s [Morrello] band, Rage Against The Machine, and then he’ll go and listen to a Billy Joel record. It seems to be less culturally appointed. With the internet, once you’re anywhere you’re everywhere. We kind of embraced it as spreading the gospel of our band, you know. And we use it quite a bit.

There is plenty political music out there.

You have Tom’s band, or just Tom – The Nightwatchman. You have some other friends of mine, Against Me, who made some pretty political records. You can find it out there. It’s just not the leading force of popular culture…you know? As it was I suppose…certainly in the 60s.

Why that is I think the issue became more complex and harder to pin down. [Or just] less popular perhaps. I made a record, ‘Wrecking Ball’, which I thought would get discussed a lot, it got discussed a little [laughs], because it was about these issues this gentleman [previous reporter] were talking about – income inner quality that was affecting people’s lives in the United States.

There was some interest there, but it wasn’t grabbed-on to as I thought [it would]. Either ’cause there is so much out there and because the issues are so complicated – they’re less easy to summarise in a pop song – for a lot of people, perhaps?

There are a lot of other things that distract people: We’ve got the rise of entertainment media, the rise of reality television, all of which is not that entertaining or very real, unfortunately [laughs]. So it’s a tremendous distraction, you know? But it is addictively compelling and I can understand that. So you have to break through all that. We forget that in the 60s and 70s, [we had] virtually no entertainment media, there were very few magazines that even covered rock ‘n’ roll. Rock ‘n’ roll was rarely covered in major newspapers. It was a smaller world, there were fewer distractions.

It was a different time. When someone is coming out with a political message right now, they would have to compete with all those other things – usually the best way to do that is to have a hit of some sort [laughs].

It is more complicated and it’s less of a unified… there’s no sense of movement per se, as there was at that particular moment. But there’re a lot of people out there committed to political ideas and making it a big part of their records.