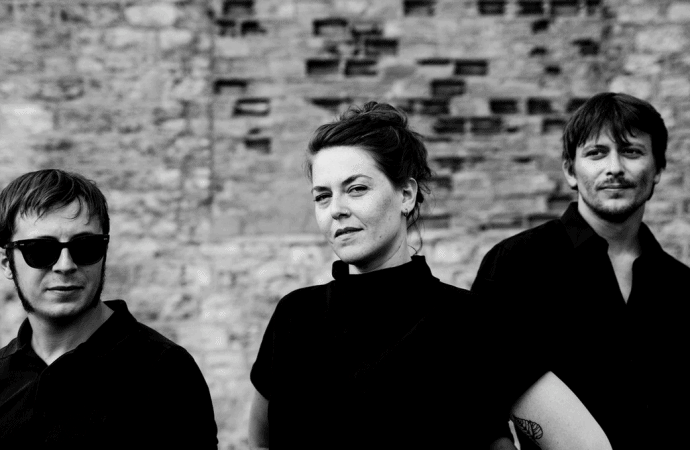 Marie and Mathieu of bluesy dark-noise duo Hoboken Division chat about originality, onstage dynamics and their “robot-drummer” What was it that first attracted you to music? Marie: I don’t know if there can be a simple explanation for that. I’ve always watched shows saying to myself “that’s gonna be me later”. It was just here. It’s

What was it that first attracted you to music?

Marie: I don’t know if there can be a simple explanation for that. I’ve always watched shows saying to myself “that’s gonna be me later”. It was just here. It’s a way among so many others to express yourself, and I guess it was mine since the beginning!

Mathieu: The first show I went to as a 5 or 6 year old was ZZ Top’s. There was so much energy and contagious joy that I went home with eyes full of stars! Later, I realised that all big societal changes were accompanied by music genres: blues, soul, punk, hip-hop, rock’n’roll…. That’s what really got me into it, realising that, aside from being a simple entertainment, music was carrying messages, and helping things to change.

How would you describe your sound?

Marie: We are trying to make it as true and raw as possible. We want people to feel all the roots; we want to reply to all those great musicians who did such great things for music before us – those who put their guts in their songs a long time ago. We love those dirty guitar and harp sounds, and we love to mix old delta-blues-like sounds to our modern, yet still raw, drumboxes. We also love to add Indian instruments. We want [the sound to be] coherent, deep and true, but with no border to the creativity.

Mathieu: We want [to inject] those deep delta-blues feelings into the contemporary world we’re living in, with our way of express[ing] it, with the techniques and gear we’re using today. As PJ Harvey once said, blues is making the best you can with the few you have!

Marie: Sometimes it’s obvious, almost casual, and sometimes it takes us a very long time … but usually, Mathieu comes with riffs, inspirations, and those pieces of sound inspire me [to write] some lyrics, or at least a special mood that will help us in creating the whole track. We work together from the beginning to the end of the process.

Mathieu: It’s a constant exchange. One can have the idea of a sentence, a melody, and the other picks up on it, like a discussion.

What do you enjoy most about the collaborative process of writing music?

As there’s only the two of us, we need to be together. And our differences help us create the sound we like. We do not come from exactly the same musical universe, so we like to think that we are learning from each other’s ideas – and even mistakes – all the time.

What song are you most proud of writing?

Marie: I love all of them! If I had to choose, I would pick “Radar On”. It’s one of the first ones we wrote together, and everything in it has a very special meaning, far beyond just the lyrics. Every time we play it live, something special happens on stage.

Mathieu: I love them all too … But I’m very proud of “Everything’s Fine”, [which is] unfortunately not recorded yet. We had some fun arranging it, forging an accordion to obtain a heavy sound and adding some touches of classic piano!

How would you describe your dynamic onstage?

Mathieu: We worked hard on this! But mainly, we are trying to find a way to have a very good dynamic even though we’re only two on stage. We want it to be warm, ‘alive’, and that’s a real challenge with the drumboxes…

Marie: I would love to bring people to dance like in an old juke-joint. Make them lose it, and let themselves go! So we are really playing together, Mathieu, me and our robot-drummer, enjoying it as much as possible to try to make them feel just as good as we do.

When you perform live, what song are you always requested to play?

Marie: People react very positively to the most heavy blues part of our set. Even when the audience doesn’t know us, the blues gathers people, and gives them an opening to discover and appreciate our music.

Mathieu: For now, as we often play in places where people don’t know us yet, we don’t have special requests from them. But when we’re playing in “known territories”, they ask for “Sugardaddy”.

What is your favourite song to perform and why?

Marie: Well, that’s related to what I said in the last question: the blues part is really fun to play live! It’s a true release. We also really enjoy playing our more intimate songs, like “A Night Out”, or “Radar On”, when we get the chance to have an attentive audience, willing to share more intimate moments with us.

Mathieu: For me it’s definitely “Shoot That Chicken”! It was the first time I played guitar in a completely different way, with open tuning and fingerpicking. This song is a real pleasure to perform, and proves every time that fingerpicking is not just for Bob Dylan’s ballads.

How did the name “Hoboken Division” come about?

We wanted to pay tribute to all those people who inspired us, old bluesmen from the beginning of the last century. The Hoboken Railroad Terminal and the Hoboken port in New Jersey, U.S.A., are very symbolic places where a lot of those men ended up, running away from the South, hoping to find a job in the North. Aside from this, it’s also where the U.S. GI’s departed from during the World Wars, and we love to think they brought blues and jazz to Europe. They used to have this maxim: “Heaven, hell or Hoboken for Christmas”.

Which do you find more exciting: originality or experimenting with an established sound? And why?

Marie: I think it’s a little bit of both for us. Nowadays, you can easily get stuck while creating, with the feeling that everything has been done before. Especially if you’re listening to a lot of music! True and complete originality is hard. What pleases us the most is mixing different influences, using sounds that exist and trying them out with other ones. And sometimes, while doing this, you realise that you’ve created something almost unheard until then. Above all, what excites us the most is the emotion you can find in a track, whether it be a very original one or one using a more “classic” sound.

Mathieu: The originality comes from the experimentation with established sounds. When you make music, it always comes from somewhere. Nothing pops out of nothing, at least for us. And that’s what’s exciting – to mix those old established sounds with what you are and what you love, and realise how original it turns out! As a good example of this, we shared the stage with the band Tinariwen, and they play the blues with a mix of North Africa traditional instruments mixed with Fender guitars. It sounds amazing and, surprisingly [in the context of] blues music, it sounds new!

Is there a South African artist/band that you would like to collaborate with?

Marie: Unfortunately, we don’t know a lot of them… But I would love to hear from them, it’s always such a thrill to discover bands from far away. That’s one of the best parts when you’re making music – meeting and confronting your vision of it with other musicians, seeing other countries, other influences, other instruments … Bring them on!

Mathieu: We followed Future Primitives last year and really thought they were the garage band of the year! Unfortunately, they split just after their European tour. But they made a great record!