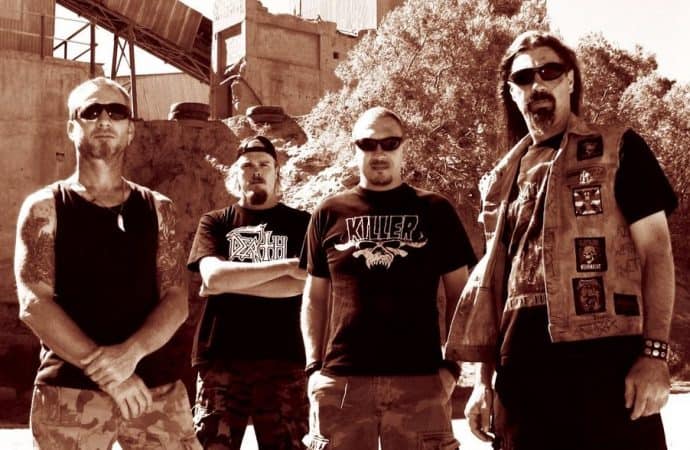 ‘We don’t discriminate in hate’ ING have been condemning everything they hate since 1999. This four-piece thrash metal band is best known for their radical social commentary and their 2011 song “Julius [Malema]” that became a ringtone hit. The band includes Bryan Villain on guitar and vocals, Henk Kruger on guitar, Marius Theron on drums

‘We don’t discriminate in hate’

ING have been condemning everything they hate since 1999. This four-piece thrash metal band is best known for their radical social commentary and their 2011 song “Julius [Malema]” that became a ringtone hit. The band includes Bryan Villain on guitar and vocals, Henk Kruger on guitar, Marius Theron on drums and Darren Webb on bass.

They live by a simple motto – do not discriminate in hate – and have received a comprehensively growing support over the years.

Rolling Stone spoke to Bryan Villain about the band, and everything that pisses them off.

When did the band form?

ING was formed in 1999 by current members Henk and Bryan in Durban. The current line-up has been together since 2011 with Marius taking over drum duties in early 2010 and Darren joining on bass the following year.

Is the band’s name ING an abbreviation?

ING is not an abbreviation but a suffix for everything our music covers. Everything worth doing ends with ING.

The band went through a lot of changes since its formation. What made you settle on the current line-up?

We settled on the current line-up because we believe this is the strongest the ING hate machine has ever been. We all agree on what to do and how we want to do it. Musically, we are all able to challenge each other using the different musical backgrounds we come from, and have shaped the ING sound to what we believe to be the best incarnation of the band to date. The guitar styles of Henk and Bryan work together perfectly and Marius’ drumming offers the perfect backing barrage to bring the attack to the frontline. Darren with his punk background completes the sound on bass, and his backing vocals complement Bryan’s hate- fuelled bile-slinging.

In a recent interview with Zombies Ate My Girlfriend they said you guys focus on political lyrical content. Do you consider ING to be engaged political commentary?

They’re somewhat off the mark there. Those who come to our shows know that ING has a simple philosophy – we don’t discriminate in hate. We have dealt with topics that cover politics, serial killers, the Middle East, paedophiles, China, building bombs, solving famine, gangsterism, the end of the world, taxi drivers and war.

Has the change in the political landscape since the band started given you a new perspective?

Nothing much has changed in the political landscape since 1999, other than the fact that the ruling party got worse in hiding corruption and started moving towards an authoritarian state. Back then the same issues were around as today, however our subject matter then was as broad as it is now. It is everything and yet it is nothing.

How has the public responded to ING?

People will always be angry about situations in the world and some of them will always find their release in metal. ING has an old-school feel of thrash, this is what we love and believe in. Metal will always change and develop and there will always be the new big thing. However at the end of the day, when you really need that fix of metal, you’re not going to listen to all those new incarnations with their super-clean production and mechanical percussion. You go listen to some fucking Slayer! That’s what we offer, a throwback to four guys playing some heavy fucking thrash. So far people like what we do and we believe that those who look for a violent fun alternative, find their release through ING.

What is the theme of your album Ingquisition?

Your songs use themes and voice clips of individuals that shocked society (like serial killer Moses Sithole and the Columbine shooters). What is the motive behind that?

The general theme is mayhem, chaos and destruction all embodied in hate. Using the Columbine shooters sound clip was meant to bring a feel of realism to the song “God’s Mistake”. It encompasses the view of the killers in their eyes. An embodiment of what they deem themselves to be. By bringing the listener into the reality of the track, the horrendous nature of the crime becomes that more clearer and puts it in perspective. Which is more effective: a movie that contains scenes of violence or a news clip showing an actual execution?

“Gang Bang Bang” is about gangsterism and violence on the Cape Flats. The song takes a stand against it. Is ING a metal protest band?

ING is not a protest band. The song merely highlights life on the Cape Flats, and how people are used as pawns in all walks of life. The fact that our institutions make criminals, and that our justice system is ineffective in bringing the leaders of gangsterism to book, we had to write a track about it. We certainly are not going to start burning candles in night vigils for the fallen, but merely convey the message to not waste your life for someone else’s greed.

The band’s logo resembles the Nazi emblem. What’s the story behind it?

The purpose of the emblem is to be immediately thought- provoking and to make people go out and look at what it’s about. When you see a swastika, or something resembling it, your mind immediately goes to Nazi history. The purpose therefore is to have people draw up those thoughts and then go and find the band to understand what it’s about. The basic question that we put to the public is: “Is this what you want?” If we don’t stop our leaders and take control of our country and freedoms, we will end up in the same boat facing the same horrors as history has shown us is possible. We are musicians and our weapon for social awareness is our music.

That being said, we are metal musicians and our views and commentary are not always socially acceptable, but we will do our damn best to make you aware of it and allow you to form your own conclusions. However to satisfy those who are quick to draw assumptions, the red, white and black colours denote the colours of oppression, the AK47’s symbolise freedom fighters, and the fact that they cross in the white circle denotes the cross you make on a ballot. It basically embodies how our country is on the precipice of turning into an oppressive dictatorship. Those who fought for our freedoms will now become our oppressors.

ING will be performing at Rolling Stone Fridays 1st of February at Mercury Live, Cape Town. You can join the event here.