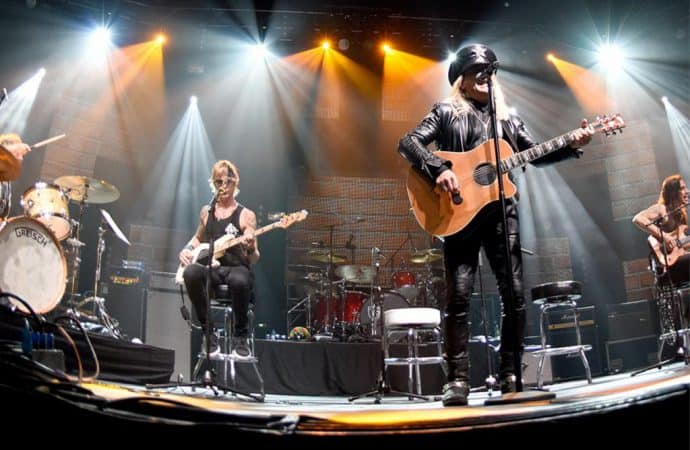 Kings of Chaos took Africa by storm in Cape Town to the delight of sold-out crowds, and fired up fans alike. The iconic line-up is a group of truly “Legendary Rock Stars”, made up of several bands including Guns N’ Roses, Deep Purple, Velvet Revolver, Slash, Def Leppard, Collective Soul, The Cult, Alter Bridge, and

Kings of Chaos took Africa by storm in Cape Town to the delight of sold-out crowds, and fired up fans alike. The iconic line-up is a group of truly “Legendary Rock Stars”, made up of several bands including Guns N’ Roses, Deep Purple, Velvet Revolver, Slash, Def Leppard, Collective Soul, The Cult, Alter Bridge, and Skid Row. The question must be asked: “Is this the Greatest SuperGroup ever assembled?” Or simply a kickass covers band? Sure, some cynics might dismiss the idea of an ensemble of ageing rehab rockers coming together to kick out some of their biggest Billboard chart jams. But the reality couldn’t be further from the truth.

The announcement that The Kings Of Chaos will be recording an EP, sometime in the unspecified future, was the seminal moment of the pre-concert hype, and a welcome delight to the S.A. media in attendance. They announced that original writing is currently taking place during their travels around the globe. This suggests a future beyond the current schedule of shows, and a possible long-term commitment, despite their other projects. The Kings are led by drummer Matt Sorum, (Guns N’ Roses, Velvet Revolver, The Cult) who acts as the “Team Leader” in what is an incredible group of loyal friends, who have decided to set their egos aside, and take off around the world playing the best songs of each of their respective catalogs.

The immediate impression that each of the band members give, is one of friendship, loyalty and honor. Duff McKagan (Guns N’ Roses, Velvet Revolver) opened up during an exclusive interview saying, “This will be one of those times I look back and go ‘Fuck! I went to South Africa with all these great guys.” Hardly your typical rock ‘n’ roll attitude, nor a “let’s take the money and run” vibe. Sorum, dressed in a top-hat and ever the jokester, set the tone immediately with thoughts of fun, friends and high octane performances. Sorum said it best: “It’s Sex and Love, and Rock N Roll”.

After a dramatic intro, ‘High Octane Nuclear Rock’ ensued, starting with Deep Purple’s “Highway Star” and the classic “Smoke On The Water”. Glenn Hughes’ vocal performance was nothing short of phenomenal, hitting those high notes that most mortals half his age never even attempt. The driving guitars of Dave Kushner of Velvet Revolver and Gilby Clarke of Guns N’ Roses set the tone for the rush of violent sound to follow. Collective Soul’s Ed Roland followed with the hit single “Shine”, before Def Leppard’s Joe Elliot took over with “Pour Some Sugar On Me”. The crowd was completely mesmerized, as the stage was littered with Rock Stars. The feelings of mutual respect and admiration between each member was palpable, and it seemed as if they were proud to be playing with each other. Technically, the band was so tight, you would have thought they had spent a year rehearsing all of these songs, they sounded flawless, and the fun they were having on stage, was certainly felt by the audience. The crowd could sense the brotherhood, and it made for an unforgettable dynamic.

Seeing Slash take the stage with bassist Duff McKagan was enough to get the crowd into a frenzy, as they rattled off a couple of GN’R numbers before they decided to quiet the set down with an acoustic interlude. They brought out full size couches and captain’s chairs, as they all took seats with guitars to compliment Glenn Hughes on the acoustic soul gem “Mistreated”. After Hughes gave a spectacular, soulful, and angry acoustic version surrounded by the entire band, they all stood and gave him a standing ovation. The crowd joined in, sensing they were witnessing something unique. Ed Roland, who was instrumental in getting the Kings Of Chaos to Africa, followed with a vocally tender and heartfelt rendition of “The World I Know”. The acoustic interlude was in full gear when Alter Bridge’s incredible singer Myles Kennedy sang Velvet Revolver’s classic “Fall To Pieces” with four of the former members of VR in tow. His version was nothing short of spectacular, and it was clear that he and Glenn Hughes stole the vocal show.

Africa the continent, was also on the minds of all of the Kings Of Chaos during this extended trip. The band took extra time between shows to enjoy the lush environment. Each of the band members embarked on Safari’s, Shark Diving, and various outdoor activities with family and friends. It’s not often the case when these types of tours are planned and executed, and it only added to the special nature of the experience.

Andy Mac, Event Promoter and Music Industry veteran (see Symphonic Rocks+ Mac Stanley), was quick to point out: “The guys are doing this for all the right reasons: music, friends and kick-ass Rock ‘n’ Roll”, adding “It’s got an almost spiritual quality to it”. The crowd would certainly agree, as the feeling in the Grand West Arena was a mix of extreme volume and mutual admiration. The feeling was confirmed after the show by singer Myles Kennedy, who interrupted the production of the new Alter Bridge album to fly in at the last minute to replace Skid Row’s Sebastian Bach, “Everyone is so grounded, there is a feeling that nothing is out of place, and there’s an absence of anything weird”. Kennedy, who along with Deep Purple’s Glenn Hughes, amazed the audience with his 5 octave vocal range, and his ability to bring an emotional element to the microphone, quipped: “It’s an honor just to be a part of it”.

The volume got turned up once again with Deep Purple’s “Burn”, and an ambitious Led Zeppelin medley, with Myles Kennedy filling in for Robert Plant. The fact that Kings Of Chaos would even attempt to cover Led Zeppelin on stage, shows you the kind of ‘balls to the wall’ attitude of Sorum and company. They did Led Zep proud by hammering out “Communication Breakdown’, “Gallows Pole”, and “The Immigrant Song”, to the rousing ovation of a sizzling crowd. Velvet Revolver’s “Slither” followed, with Slash and Dave Kushner pulverizing their guitars in a violent rampage, with Ed Roland at the mic. The Kings even payed homage to Freddy Mercury with “Tie Your Mother Down” which saw Joe Elliot taking the honors on vocals. Then came Slash, as the crowd reached a fever pitch during Guns N’ Roses “Sweet Child O’ Mine” and “Paradise City”. Slash was in full machine gun mode, taking every eye in the crowd on a dizzying journey of rapid fire gymnastics. The question has to be asked: “Is Slash actually getting faster and better as he moves forward?”

Your email address will not be published. Required fields are marked with *