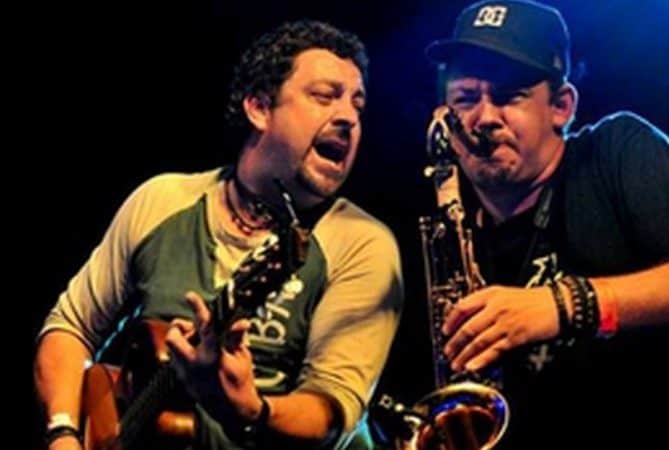 “We all fell in love with the spice and diversity Africa had to offer from her womb of sounds and rhymes” Founded circa 2000 by brothers Albert (vox & guitar) and Gideon (drums) Meintjes and later joined by Mike Roy (bass) and Jaco Loots (percussion), Scicoustic is an acoustic rock band. Their melodic sound is

Founded circa 2000 by brothers Albert (vox & guitar) and Gideon (drums) Meintjes and later joined by Mike Roy (bass) and Jaco Loots (percussion), Scicoustic is an acoustic rock band. Their melodic sound is underscored with strong African rhythms and will, says the band, “take you from calm serenity to gut-wrenching emotional highs in a matter of seconds, coming down on you like an African hailstorm and then suddenly leaving you hanging out to dry”.

Rolling Stone caught up with the Meintjes brothers to chat about their long-overdue third album, their African influences and their upcoming performance at this year’s 10th STRAB Festival in Mozambique.

What prompted you to incorporate African rhythms in your music?

Albert Meintjes: We all got involved in the music scene around 1994. As we all know, it was a time of dramatic change in South Africa and we were over-exposed to all African elements in massive quantities, while searching for our own identities as young white liberal South Africans. We all took the musical route cause that was what we could identify with and relate to as young musicians and we could connect across the race boundaries much easier and with effect and success.

That’s beside the fact that we all fell in love with the spice and diversity Africa had to offer from her womb of sounds and rhymes.

Gideon Meintjes: Africa gave birth to all rhythm, and all musical style’s roots in rhythm was taken from what already existed in Africa. So to conclude, we incorporated ourselves in our music, as we are all Africans.

AM: A thought, memory, feeling or emotion always triggers the journey, and a riff or melody gets stuck in my mind that captures and best describes the moment. From there it’s telling the story and laying out the path I want the listener to follow so that every part of the song becomes a scene and has an emotional impact.

The music soon follows where each member and instrument explore hundreds of different ideas to basically create an atmosphere for each scene and we keep at it until we get goose bumps. Then we have captured the soul of the song, and only then can we successfully tell the story from stage.

The band’s most recent album, Come And Love Us, came out in 2006 – after eight years, I would imagine that you’ve got a whole bag full of new songs. Why the long hiatus from the studio?

AM: Guilty as charged, I know.

Yes I do have a bag full of songs and a trick up every sleeve. The guys in the band grew up and got married and our team/band goal, where we wanted to be and what we wanted to do, became hazed and confused.

We took a break from writing new material as a band and reshuffled the members until last year when we really found magic again with Greg Georgiades on guitar and ukulele and Wouter Reyneke on bass, who joined the band. Gideon [Meintjes] is still on the drums and we are stoked to have him back after a serious neck injury, with myself on guitar and vocals.

I have been performing solo for a long time since and it was a humbling yet magical, creative process. There are loads of new songs and we are working at them in a different way than before. Where we sat in the studio carving and chiselling all together, I now mail the song ideas to them and each guy, in his own time, creates his part and role in the song.

2014 will see Scicoustic in the studio with an album that will strip the soul naked and tease the mind like never before.

You guys played at the first official STRAB fest and now you’ll be playing there again after 10 years. In your opinion, what makes STRAB different from other music festivals?

AM: STRAB is the perfect getaway/holiday vibe festival where you get to drive into another country and just get lost amongst the friends and fellow musicians. It has that “year-end function” vibe for musicians where we just play music and hang out with all the hardcore fans willing to travel across borders for the love of music and friendship.

What song do your fans always request?

AM: “Dancing in Mozambique”.

Even though you guys haven’t brought an album out in a while, you still manage to play a shit-load of gigs. What’s your secret to staying relevant when it comes to live shows?

AM: I think the fact that we love it to perform. It truly is the most fun we can have together and that keeps us coming back for more. The performance side of the show is always planned to perfection in that we keep the songs fresh with new exciting arrangements, challenging ourselves, and the songs. We all absolutely love playing the songs and that adds tremendously to the show and helps us connect with our audiences.

GM: Music will always be relevant to music lovers, whether played by youngsters, or seasoned musos. [Laughs]