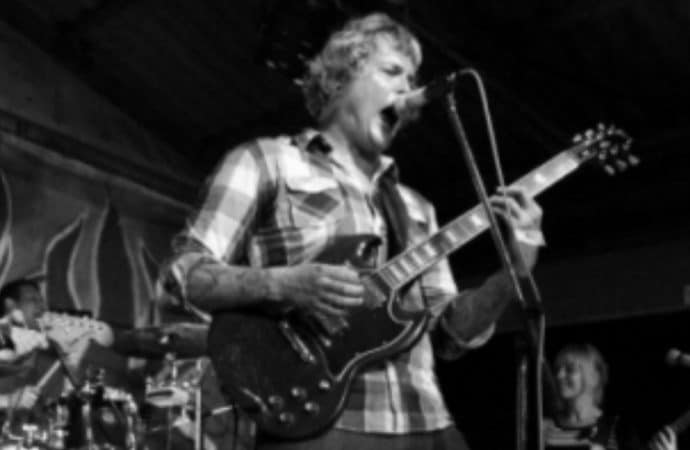 “It took months before I even picked up a guitar again, but when I did I realised it was the best way to heal and also the thing I love most in life” Southern Gypsey Queen’s filter-less frontman, Gareth Wilson, opens up about his return to the spotlight, his job as a ‘talent buyer’, his

“It took months before I even picked up a guitar again, but when I did I realised it was the best way to heal and also the thing I love most in life”

Southern Gypsey Queen’s filter-less frontman, Gareth Wilson, opens up about his return to the spotlight, his job as a ‘talent buyer’, his opinionated Facebook posts, side projects and what we can expect from SGQ’s set at this year’s STRAB festival.

I’m sharp bra, fat and overworked but hopefully getting back on the road will get me laid again.

The last time I saw you perform with Southern Gypsey Queen was at Up The Creek 2013 in collaboration with Albert Frost. Not to kiss your ass or anything, but that was probably the greatest rock set I’ve seen in my life. What sparked that potent collaboration?

It was a little jam we did together at Splashy Fen without a rehearsal. We just saw the impact it had on the audience and decided it was something that needed to be done. [It] was also the most fun I’ve ever had musically – I got to party and jam with a childhood hero of mine. [SGQ and Albert Frost] actually recorded a new single together called “Chains” with Tim Rankin, which is quite possibly the best track I have had the privilege of being part of.

We will definitely be doing the collaboration again. We plan to release it as a free download via Watkykjy.co.za one of these days.

Since your brother (and bandmate, Paul Wilson) sadly passed away last year you decided to put the band on hold for obvious reasons. What made you decide to return to the stage and how was your recent reunion at Splashy Fen?

I had only ever been in bands with my brother and the thought of playing without him was something I just didn’t feel like doing. It took months before I even picked up a guitar again, but when I did I realised it was the best way to heal and also the thing I love most in life. I tried to kill it but it kept coming back.

Tammy [Wilson] and I both started new projects but really just missed playing the SGQ songs again … also, I really missed being onstage with Tammy, we have also been through a lot and you can’t just get that kind of musical chemistry overnight.

The Splashy Fen set was great, we used Gareth Bunge, one of Paul’s close friends and drum students on drums and he was absolutely amazing … Funnily enough, Tam and I were the most nervous to do it, at times I think Bunge and Jaco Mans [now a permanent member of SGQ] kept it all together.

For STRAB we are using Nathan Smit [Duck ‘n Cover, Gang of Instrumentals] he is also an amazing player and was one of Paul’s favourite drummers to watch back in the day.

Before Paul passed away there were a few rumours that he recorded some songs. What happened there?

He did record some tracks with Peach van Pletzen that he and Isaac [Klawansky] from Shadowclub wrote together, not sure what happened to the tracks, I think his wife might still have them.

Any plans to do a new SGQ album?

Most definitely. We have a few tracks set aside and plan on writing new tracks with the new members.

You’re also “a talent buyer” at Hilltop Live. What does that mean? And while we’re on the subject of your music industry job, what would you have done differently back in the day with SGQ knowing what you know now?

“Talent buyer” always stumps me – you can’t buy talent! [Laughs] I kill myself sometimes. No, I book all the local acts for all of the Hilltop Live events. It’s a rad job and I get to work with loads of great artists from different genres.

As for what I would have done differently with SGQ knowing what I know now? Good question, man. Not really sure, you know? I just wrote songs and played them to whoever was willing to listen, we were lucky people were still listening after 10 years.

The past year or so you’ve become quite the social media commentator with a lot of your Facebook posts sparking some interesting debates and responses. Where does this sudden urge to voice your opinion come from? Ever thought of starting your own blog?

I am actually starting my own blog called “When Poes Comes to Shove – With your host G-Willy”. I have no filter so I tend to think aloud, or in this case all over the interwebs. I have always been a little opinionated for my own good, but hey it’s only like my opinion, man.

Tell us about your side-project Coelacanth… What’s the vibe?

Myself, Jaco Mans [Die See, Tidal Waves, Fake Leather Blues Band] and André Kriel [Black Cat Bones]. Three guitars and lots of vocal harmonies. It’s the band all of us always wanted to be in – irrelevant as fuck… Radio stations, labels and promoters will probably not be interested in our outlaw folk music, but we are excited as hell. I like to think of it as acoustic music for rock ‘n’ rollers: no loop pedals or gimmicks, just old fashioned songwriting in its simplest form.

SGQ and Coelacanth will be playing at STRAB – what can we expect from the sets and what’s your fondest memory of the festival?

You know neither of these bands are reinventing the wheel, we play the greatest genre of all: Rock ‘n’ fucking Roll!

I love STRAB. It is one of the few festivals that still pushes rock, even when the rest of the industry is dead set on ignoring it at any cost. Best memories of STRAB you say … Fuck, I don’t have any. Normally I cane it so hard the only proof that I was there are the mosquito bites on the back of my legs and my pink teeth from all the rum and raspberry. I do remember one year when myself and Louis [Roux] from Shadowclub had some very hedonistic adventures, but I will have to tell you about those in private.