‘I get the feeling that there is more respect for Afrikaans as a giant music-market power and even some post-mod irony.’ Rolling Stone met up with one of the world’s most famous Afrikaners to chat about fucking up the high notes, Wikipedia hackers, Jack Parow, bands and fans. Hi Steve thanks for taking time out

‘I get the feeling that there is more respect for Afrikaans as a giant music-market power and even some post-mod irony.’ 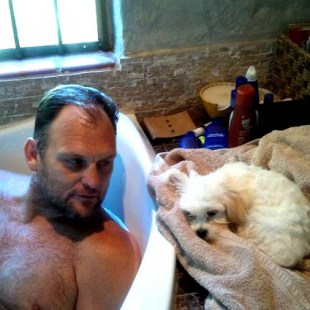 Rolling Stone met up with one of the world’s most famous Afrikaners to chat about fucking up the high notes, Wikipedia hackers, Jack Parow, bands and fans.

Hi Steve thanks for taking time out of your busy schedule to chat with Rolling Stone, we appreciate it!

No problem. The honour is mine. It’s the fucking Rolling Stone, dude.

You started acting, singing and writing over 25 years ago and since then you’ve never been out of the limelight, how do you manage to keep yourself relevant?

I steer clear of too much pop music. It’s dangerously ephemeral. My music gravitates between this and folk and rock and… very importantly, rugby songs! I also can’t recall ever trying to be someone else. It’s liberating if not dangerous.

What is the weirdest thing a fan ever said or done to you?

Said? I want your baby. Done? Exactly freaking that.

What CD is in your car right now?

Being an outspoken guy and one of the most famous Afrikaners in the world, how do you stay cool with harsh criticism from the public? For instance a few days ago it was published on watkykjy.co.za that your Wikipedia page was hacked and some of the details changed. How do you respond to something like this?

My Wikipage has almost never survived a week. I merely ensure ten other authoritive platforms for fans to reach you. Not so difficult, these days. Live shows worldwide and social media has turned the planet upside down. Generally, I come from stock that loves challenging the mainstream on hackneyed ol’ one-way grain blabla&bla. A tough hide helps. You can’t insult me. But you can beat me in a healthy debate.

What’s your response to Jack Parow’s quote in the Cape Times after the incident at Vodacom Winter Festival in New Castle? He said: “If you’re going to put me on after Steve Hofmeyr, well, our fans are worlds apart. The good thing is he opened for me and you know you’ve made it when he opens for you…”

I have artists before and after me at almost every concert. With a cross-generational appeal, one starts asking to perform after Kiddies TV but before The Bachelor, i.e. 7-9 pm. Parow doesn’t have children. He’ll catch on.

One of your many children, Armand Hofmyer, is also a very successful singer. What was the biggest piece of advice you gave him before he launched his career? And would you ever consider doing a father-and-son album in the future?

You give me too much credit. I have only five! A Father/Son collab? Maybe later. My advice to him is universal: treat people like people, not fans. Even the description “fan” can be somewhat condescending. I tell him to avoid high notes you can’t reach when sober, because you’ll surely fuck’em up when you’re drunk.

Will you ever consider putting a band together again, like Kurt Darren did recently?

I have always had bands, even during predominantly backtrack tours. WAARMAKER, DIAMOND and KRISSTOFFERSON tributes were exclusively national band tours. I still rely on Andries Botha and the boys to help me out sporadically. But I don’t see bands, rather than music, as nirvana. A piece of material or concert works for other reasons.

In your 2007 book of quotes, Jêmbekseep, I read an interesting quote that was taken out of a letter you wrote to SL Magazine in response to criticism against the Afrikaans music industry. The quote read: “In my paltry 15 years in the music industry I have seen better mags than yours come & go, but never without getting their condescending stab at good ol’ kômmon Afrikaans and its merchants. This from the local English music industry which has in the last decade hardly hatched a market.” Do you feel this quote still has merit in 2012?

Good observation. And, no, I get the feeling that there is more respect for Afrikaans as a giant music-market power and even some post-mod irony making millionaires of Die Antwoord (and Jack Parow). Ridding the world of Afrikaners has been a murderous project, but always one doomed to fail. We’re still here having a ball of a time, selling more than ever.

Where will Steve Hofmeyr be in 10 years?

I’ll be writing, fighting, annoying, campaigning, hoisting flags, running riot and doing mostly South African things. Maybe I will be lured from my bunker for a rendition of Die Bloubul (for nothing under six figures…). Who knows. But I’ll be around.